Hung Kings Temple Festival is a tradition acknowledging the great merits of Hung kings who built the first state of Van Lang - the first country of Vietnamese people.

If you’re wondering where to visit in Vietnam, why don’t you spend your holidays on one of our biggest festivals - Hung Kings Temple Festival, Phu Tho? It is a national festival to commemorate Hung Kings who had built the country, and this Hung Kings’ death anniversary has become a long-standing cultural tradition in Vietnam.

It is sacred and noble in Vietnamese folk consciousness. Thus, the festival is solemnly celebrated annually with the national ceremonies, with the pilgrimage "returning to the roots of the nation" of hundreds of thousands of people from all over the country and those living abroad. 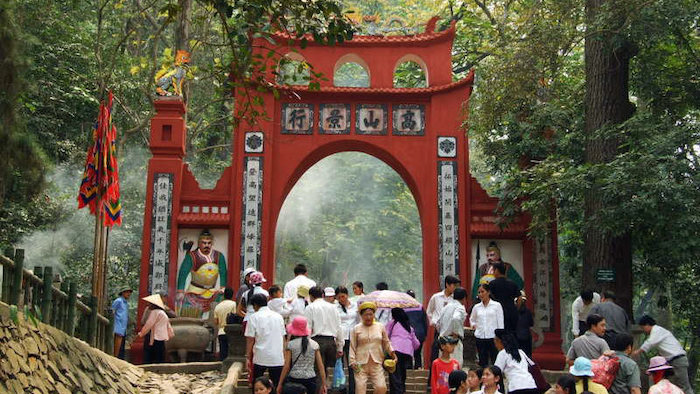 The historical relics of Hung Kings Temple include four main temples with the ancient Vietnamese architecture, including Lower Temple, Middle Temple, Upper Temple, and Well Temple. From the first steps at the foot of the mountain, then through a gate, tourists will step up to burn incense and visit the temples, ending at the Upper Temple on top of Nghia Linh, where the sixth King Hung Tomb was built.

The Hung Kings Temple festival lasts from the 8th to the 11th of the third lunar month, of which the 10th is the most significant. Like all other festivals in the North Delta, the festival consists of two parts of the ceremony and the celebration. 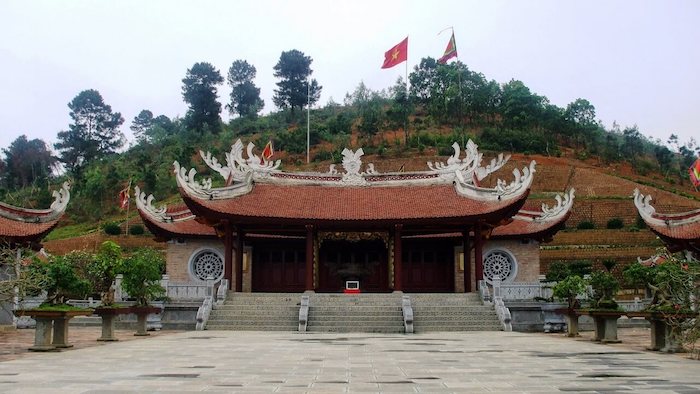 Following the ceremony is the time for the festival which annually organizes the palanquin contest for the surrounding villages. With the appearance of the lavish procession, the festive atmosphere becomes more and more bustling. Each procession has three palanquins going together, which are painted red with gold plate and carved very sophisticated.

The decoration is exceptionally bright and beautiful. The first palanquin brings incense, flowers, incense lamp, betel and areca, water, and wine. The second one has the ancestral tablets of the holy people, a parasol and a fan with all colors and decorations. The third palanquin has the square and round sticky rice cakes, a boiled pig head.

The winner of the first prize of this year will be on behalf of the remaining in the next year to pick up its palanquin to the Upper Temple where the court will celebrate the national festival. This glory brings great pride and honor to the winning villager because they think that the Hung Kings and the gods would bless luck to them.

The festival clearly expresses the spiritual life of the people here through a form of cultural activities and traditional folk beliefs. This folk cultural activity has become an indispensable demand for the village communities living around the Hung Kings Temple.

On December 6, 2012, UNESCO recognized Hung Vuong worship in Phu Tho as the intangible cultural heritage of humanity with elements of the spiritual life of the Vietnamese people existing for thousands of years, presenting the foundation of the spirit of great national unity and community cohesiveness.

The uniqueness of this belief is interpreted in the element that Hung Vuong worship is the National customs. It is a cultural phenomenon that not every nation has. 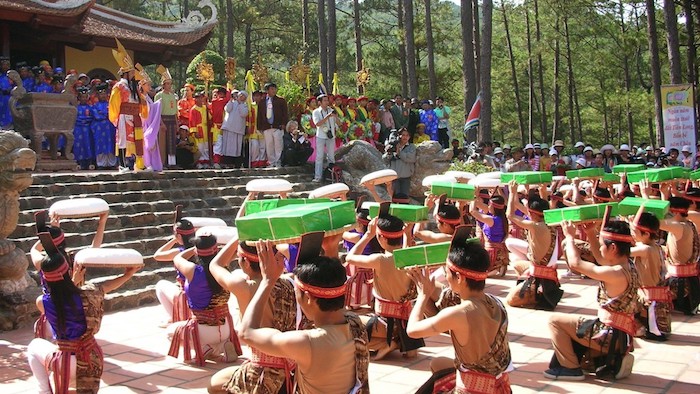 A tradition acknowledging the great merits of Hung Kings

At Hung Kings Temple festival, a “Tho” singing is held (also called “Xoan” singing) - an essential and unique ritual of Phu Tho culture. In Lower Temple, there is “ca tru” (also called “nha to” or “a dao” singing). If having a chance to attend the Hung Kings Temple festival, tourists should try to listen to these unique traditional customs once to learn more about the spiritual life of the people here.

Besides, at the festival, there are traditional folk games which are very active, attended by many people such as swings, throwing a wooden ball, seesaw, wrestling, etc. In the evening, people organize the “cheo” and “tuong” in front of the Lower Temple or the Well Temple.

Hung Kings Temple festival, Phu Tho is a beautiful custom in the tradition of Vietnamese people, and for a long time in the folk consciousness, the land of the ancestors has become the "sacred holy land" and the origin of the nation. Coming with one Vietnam group tour or Mekong Delta tour by speedboat, you will admire the most attractive destinations in the country. If you need further information, click now to our website. Thank you.