Phu Quoc is a charming island in Vietnam with numerous gorgeous landscapes and vibrant activities.

But, there are a lot of tourists who don’t know exactly “where is Phu Quoc island?”, so the post will help you understand more about the Geographical location of Phu Quoc island.

Phu Quoc Island is triangular with the bottom edge is in the North, gradually decreasing in the South. If the bird route flies north-south, the island's largest length is 49 km. The largest place on the island in the East-West direction is in the North Island with a length of 27 km. The perimeter of Phu Quoc Island totals about 130 km. Furthermore, the total area of Phu Quoc is 56,500 ha. There is an author for the island shaped like a swimming fish and head towards the North. Phu Quoc is a highlight for travelers in South Vietnam

Regarding natural geographical conditions, the climate on Phu Quoc Island is of tropical monsoon type including hot and humid, and heavy rain. However, due to being located in the special position of the Gulf of Thailand, there is less disaster. Because of such convenient Phu Quoc weather, the island has an invaluable resource of tropical forests, including many endemic species.

This is the most valuable capital to develop eco-tourism on this island. Besides the forest, because Phu Quoc itself is an island and a big island, so other resources such as marine resources, land resources, and water resources here have great potential to exploit and distribute economic development.

Moreover, speaking of Phu Quoc, it is impossible not to mention the traditional occupations of the residents here. That is the production of fish sauce and pepper growing. Phu Quoc fish sauce and Phu Quoc pepper are the two famous products in the world for a long time. Apart from these two professions, the main economic activity of Phu Quoc residents is seafood exploitation. Recently, thanks to the rapid development of tourism activities on the island, a part of residents have turned to participate in providing tourism services such as restaurants, hotels and so on. 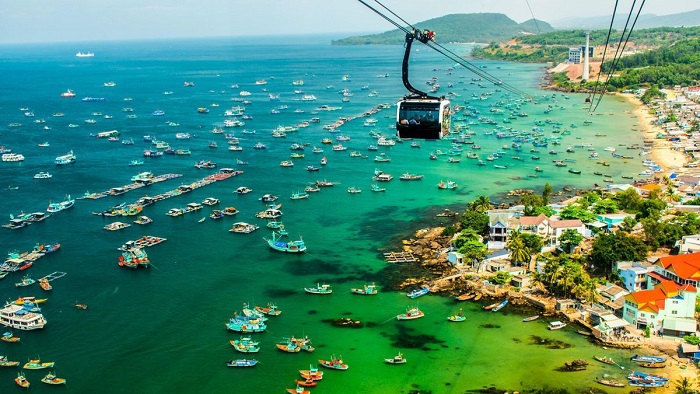 Today, the system of roads on the island is developing rapidly. Besides, the routes of transporting passengers from the mainland to the island by both air and sea are very convenient. So visitors can feel secure like traveling on the island without any problems.

At the same time, if you don't have much budget but still want to travel to Phu Quoc, you can take a Mekong Delta cruise tour which will take you here from one to two days.

Hope that after the post, tourists will have useful information about Phu Quoc island or find the best answer to the question “where is Phu Quoc island?” If you need more information for traveling to other destinations in Vietnam, you don’t forget to visit our website to get more useful things.

NAVIGATE Where is Phu Quoc island?