A Glimpse of My Son Sanctuary

This was the venue sacrifice of the Champa dynasty, as well as the tomb of the king or prince Champa. My Son Sanctuary is considered one of the centers of the major shrines of Hinduism in Southeast Asia and the unique heritage of its kind in Vietnam.

My Son Sanctuary located in Duy Phu Commune, Duy Xuyen district, Quang Nam Province. From Da Nang City to My Son sanctuary about 69 km and the Tra Kieu Citadel about 20 km. It is comprised of many Champa temples, in a valley diameter about 2 km, surrounded by the hills. Especially, it is near the attractions of Hoi An ancient town.

Usually, people tend to compare this Holy Land with complexes other major temples in Southeast Asia, like Borobudur (Java, Indonesia), Pagan (Myanmar), Angkor Wat (Cambodia) and Ayutthaya (Thailand). Since 1999, My Son Sanctuary was chosen as one of the world heritage by UNESCO. Currently, the Prime Minister of Vietnam brings it into the ranking list 23 national monuments are particularly important, becoming a famous spot on a Central package tour. 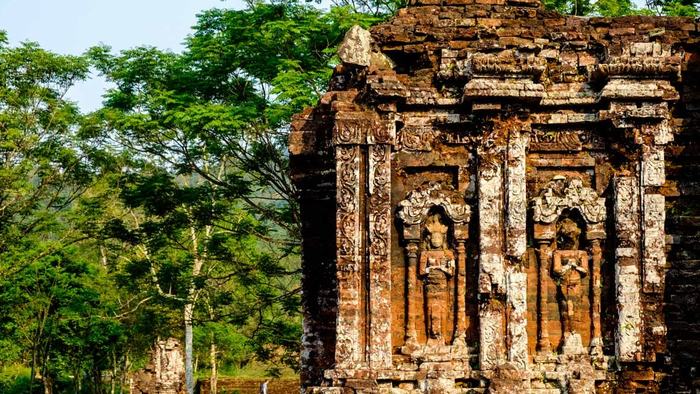 History of My Son Sanctuary

My Son was probably built in the fourth century. For many centuries, this sanctuary is adding towers and turrets, and has become the main ruins of Champa culture in Vietnam. In addition to the ceremony, which the monarch access to the Gods, My Son was the center of culture and beliefs of the Champa dynasty and is the burial place of kings, priests much power.

The first vestiges found marked the era of King Bhadravarman I (ruled from 381 to 413), the king who build a Sanctuary to worship Shiva and Linga. My Son greatly influenced by India both in architecture – embodied in the towers are immersed in the glorious past, and culture – reflected in the flow of the ancient Sanskrit inscriptions on the stela.

Based on the tablets of other texts, we know where there has been the first temple was made of wood in the fourth century. More than two centuries later, the temple was destroyed in a major fire. At the beginning of the seventh century, King Sambhuvarman (ruled from 577 to 629 years) used bricks to rebuild the temple still exists to this day.

The Kings then continue remodeling the old temples and built new temples to worship the Gods. Ceramic materials are good for keeping the memory of a people mysterious and construction techniques of the Cham tower until now remained a mystery. People still have not found the appropriate answer to the material cohesion, brick kilns and method of construction. 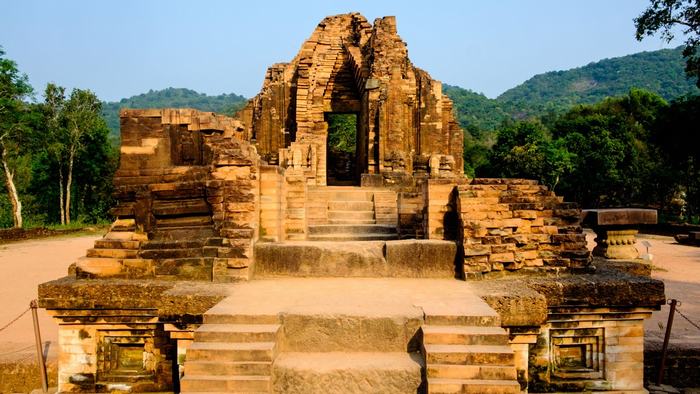 The architecture of My Son Sanctuary

Art and architecture through temples layout bring the great influence of Indian style. Sanctuary composed of many clusters towers, each cluster layout, the tower has a main tower (Kalan) in the middle, and many small towers surrounded. Klan often worships Linga (generation) or Shiva statue. Each front of cluster tower is a tower gate (gopura), followed by vestibular (mandapa), works with a functional arrangement were gifts and ritual dancing. Aside from being an architect is always facing North (direction fortune Kuvera), 1 or 2 rooms, called Kosa Grha for storage and food puree.

The tower is a pyramid, a symbol of the Holy spirit peak Meru, home of the Hindu Gods. Gate tower often turning eastward to receive sunlight. Many towers have so beautiful architecture with the gods are decorated with a variety of motifs. Most of these buildings are now decaying, but here it remains, sculpture, plaques marked the heyday of the legendary Champa dynasty.

The main temple at My Son worships a linga or the image of Shiva – the protector of Champa kings. These people pray often going around the tower under the clockwise direction on a small path. 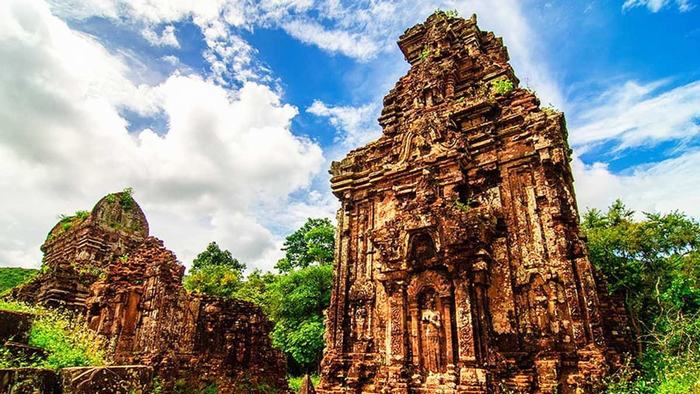 Conservation of My Son Sanctuary

The first conservation work took place in 1937 by the French scientist. In the period from 1937 to 1938, the temple A1 and small temples around it was restored. However, many towers and tombs (including combination A with A1 tower was once so magnificent – including the main tower A1 24 meters high and 6 secondary tower around, destroyed in 1969) was destroyed in the war.

In the period from 2002 to 2004, the Ministry of Culture and Information of Vietnam spent about 7 billion VND (440,000 USD) for emergency restoration projects My Son Sanctuary; a UNESCO project supported by the Italian government in the amount of USD 800,000 and restoration efforts has funding from Japan are now contributing to preventing their deterioration. The restoration work at the World Monuments Fund also contribution. Some of which are likely to collapse.

For more information about Vietnam group tour packages, you can visit our website. If you have any questions, feel free to contact us. Share this article with others if you find it helpful. Thank you!

NAVIGATE A Glimpse of My Son Sanctuary