Cheo – the most popular form of traditional theater in Vietnam

Rising from northern Vietnam, Cheo is one of the forms of traditional musical theatre in Vietnam. This kind of performance represents a high ethnic spirit.

If Peking Opera Noh is the typical form of conventional theater in Japan, Peking Opera plays the same role in China, Cheo is the most well-known representative in Vietnam. If you have a Vietnam tours package and go to the theatres, you will watch and enjoy Cheo plays.

The Red River Delta is always considered as the cradle of rice civilization of Vietnam. When the harvest period comes, people often celebrate festivals to express their gratitude to their God, who brought them the bumper crops. From the first millennium BC, Vietnamese people developed the stereotypical performances of Cheo in the courtyard of a public building or the village square.

Cheo was originated from the traditional music and dance in the 10th century of the Dinh Dynasty. Then, Vietnamese people transformed the small folk plots of Cheo based on the mimicking games into the more extended plays. 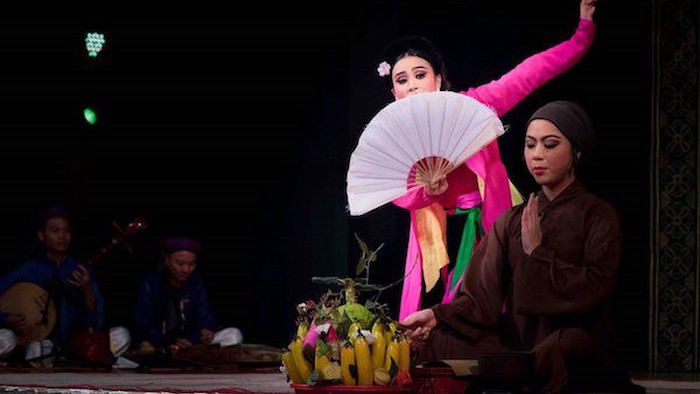 Cheo has a long history from the first millennium BC

In the 18th century, Cheo was developed actively in the countrysides in Vietnam and reached the highest peak in the late 19th century. Some famous plays such as  Luu Binh Duong Le, Quan Am Thi Kinh, Truong Vien, Kim Nham appeared in this time.

Besides, in the 19th century, Cheo was impacted by Chinese Opera through folk stories such as Pham Tai, Tong Tran or The Chu–Han Contention- the Chinese history in 206–202 BC. In the early 20th century, Cheo has performed in the urban stage. It became “the Cheo civilization.” There was also some new plays based on folk tales such as Nhi Do Mai, To Thi.

Cheo is associated with living activities as well as the festival of Vietnamese people. The main instrument of Cheo is the Cheo drum. The drum was a part of ancient Vietnamese culture. Vietnamese rice farmer often drummed to pray for rain and performing Cheo. At present, Cheo has the popular and classic plays such as Ngoc Han princess, Hoa Lu spirit, Sita, Duong Van Nga Queen, etc.

Cheo is the general art. To see the beauty and the attributes of Cheo, you must directly to the Cheo shows, Cheo plays. Cheo singing is the stage singing. It can be a person or many people sing the chorus. The melody of Cheo is very suitable for the natural voice and the Vietnamese language. Cheo singing is originated from folk melodies. The lyrics of Cheo are mainly taken from in folk literature in the North Delta.

Besides, the Cheo singing is influenced by Van singing, Xam singing, Ca Tru singing, Xoan singing, Quan ho singing, etc. Cheo singing is a national art form with the long-lasting, unique and universal feature. It meets the needs of aesthetics, education and serves effectively for the spiritual life of the people. Therefore, Cheo is always cherished and preserved by Vietnamese people.

Unlike Chinese Opera which only praises the heroic actions, Cheo indicates the daily life of the ordinary people in the rural area. The desire to have a peaceful life in the feudal society is the most remarkable content of Cheo. Some Cheo plays also describe the difficult life of the women who are willing to sacrifice themselves for other people. 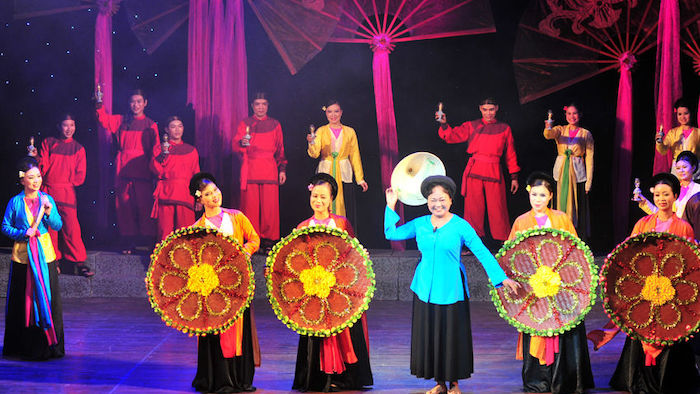 The plots of Cheo are based on folk tales with idealistic values and profound realistic. The characteristics of Cheo are often lyrical and express personal emotions as well as reflect the mutual concern of people which includes friendship, love, and compassion.

Characters in Cheo are usually normative, standardized and stereotyped. The personality of them does not change with its character during the role. The small characters can be exchanged in any Cheo plays, so they do not have a proper name.

They can be called the rich man, the teacher,  the student, the mandarin, and the clown. However, escaped from the stereotypical characteristics, some characters such as Thi Kinh, Thiet The, Tuy Van, Thi Mo have their personality.

Thai Binh is a province characterized by the wet rice civilization of the Red River Delta. Thai Binh gradually develops the tradition of folk culture. It is one of the cradles of Cheo singing. Referring to Thai Binh Cheo, it is necessary to mention Khuoc Village. 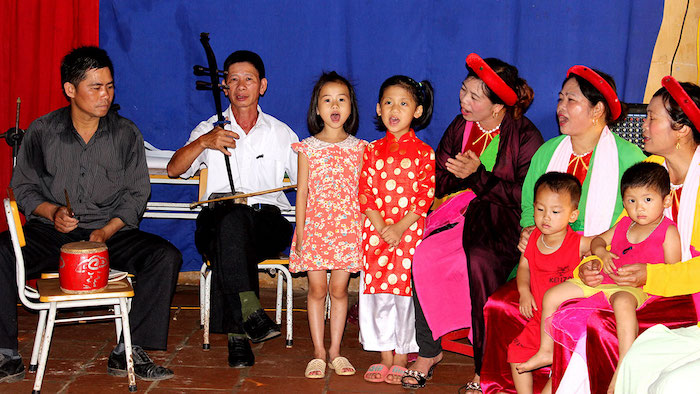 Khuoc village is now Phong Chau commune, Dong Hung district, together with Ha Xa (Hung Ha) and Sao Dien (Vu Thu). At the beginning of the 19th century, there were 15 groups which sing Cheo in the village. Not only performed in the place, Cheo was also performed in other regions to serve people. In the total of 151 Cheo tunes and songs, Thai Binh accounts for 30 songs.

In the treasures of folk art and culture, Cheo is a kind of musical theatre with a combination of singing, dancing, music, drama, which brings the national cultural identity of Vietnam. If you want to travel to Vietnam and learn about other Vietnamese cultures,  feel free to contact us via our website Vietnam group tours. Share it if it is useful to you. Have a great trip!

NAVIGATE Cheo – the most popular form of traditional theater in Vietnam