Thai people dominate this land for generations and build up the rich, unique culture that you can go to explore when traveling to Mai Chau. Let's discover with us!

Mai Chau is home to 3 ethnic minorities, including Thai, H’Mong, and Dao, of which Thai people are the largest ethnic group accounting for over half of the population in Mai Chau.

The original social structure of Thai people is called "ban muong," also known as the "phia tao" regime. The Thai lineage is called Dam. There are three key lines in Thai people’s relationship that turn into the rules which they have to follow. 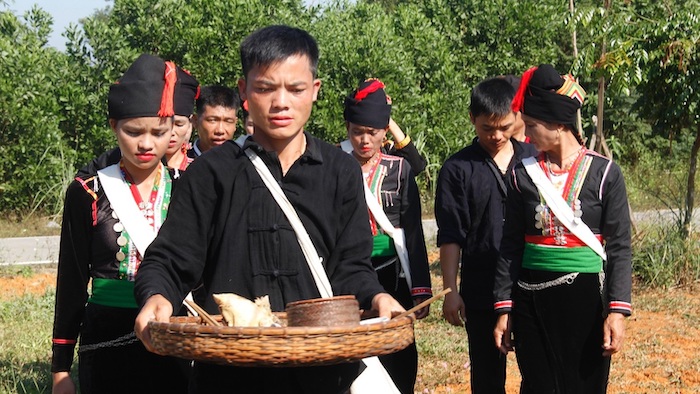 Thai people praying for the rain

As Kinh people, Thai people worship their ancestors. However, they also worship the heavens, the earth, "ban," and "muong." They often organize the rituals to pray for good crops or call for the rain.

Thai people live in stilt houses mainly made of woods and bamboos. It looks quite similar to the other ethnic Vietnamese architectures. Nevertheless, Black Thai people prefer roofs that are shaped like a tortoise with decorations called "Khau Cut."

A Thai man first lives with his wife's family for several years until his wife gets pregnant, then the couple moves to the house of the husband's family.

Thai people think that the funerals are to farewell the dead to their true permanent world, there is no sadness in the Thai’s funerals.

In tradition, Thai women have to give birth in the seated position. The placenta is put into a bamboo cylinder and hung on a branch in the forest. The mother is warmed by the fire, fed rice cooked in a bamboo tube, and must abstain from certain foods for a month. They will invite a quack to home to name the child.

Thai people educate the child in gender quite early, and they have some rituals to teach their children when they are in the ages of puberty. 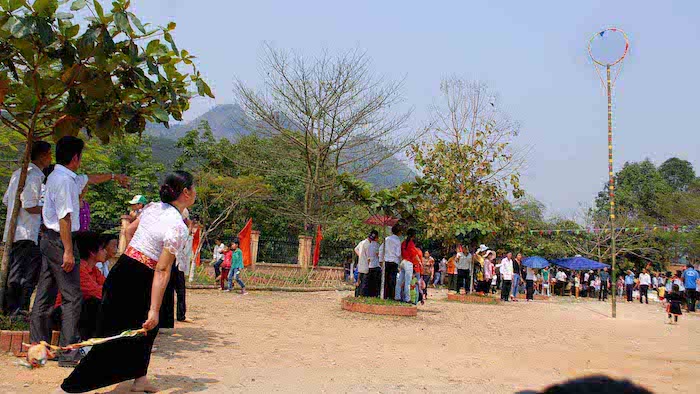 The Thai language is a small branch of the Tay-Thai group. They have a valuable treasure of myths, legends, ancient tales, versed stories, and folk songs. They like to sing and recite the "khap" along with the accompaniment of string musical instruments and a dance performance. Their folk dances such as "Xoe," "Sap," "Han Khuong," and "Con" are reflected the Thai's unique cultural characteristics.

There are so many types of popular games of Thai people such as "nem con," tug-of-war, horse racing, archery, "xoe" dance, spinning top. When spring comes, they often play these kinds of games to tight a knot the unite and this is the time the Thai boys and girls have chances to mate. There are also many other games for kids.

The Thai started to cultivate wet rice very early in history; they knew how to use the water power to bring it to their fields. They are the hard-working Vietnamese rice farmers with many experiences cultivating in the poor land. There is a Thai saying that can summarize their farming work “muong-phat-lai-lin” (which means digging of canals, consolidating of banks, guiding water through obstacles, and fixing water gutters).

In the past, Thai people only planted one rice crop a year, but now they have applied for planting two crops. So, their living standard is improved a lot. Besides cultivating rice, they also grow corn, and subsidiary crops such as cotton, indigo, and mulberry for cloth weaving. 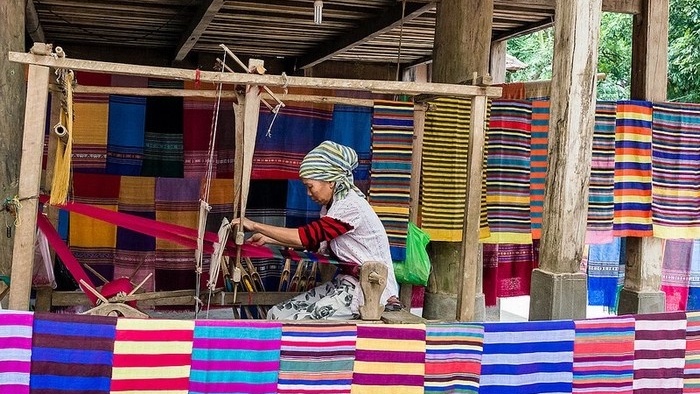 The Thai have their own Sanskrit-style writing system. Their language is the mother tongue of one million and a half people. The Thai have many ancient written works on their history, traditions, customary laws, and literature. Thai people are considered one of the ethnic groups that have the highest literacy rates in Vietnam.

The other ethnic groups in Mai Chau

H’Mong is an ethnic minority of Vietnam. They live mainly in the high mountainous regions in the north of Vietnam. In Mai Chau, they are the second largest ethnic group behind Thai people. If you come to Pa Co market, you will have a chance to admire H’Mong people in the colorful traditional dresses.

Dao is one of the largest ethnic minorities in Vietnam. They speak Tai-Thai language and have their own script. They often live alternately with other ethnics in the north. They are one of three largest local groups living in Mai Chau.

Visiting Vietnam tour group, you will have many opportunities to see the natural beauty of Vietnam as well as discover the unique beauty of Vietnamese ethnic cultures. If you have any questions, please contact us. Have a nice trip!