Vietnam is famous for not only its attractions but also its unique culture. One of the most extraordinary cultural beauty of Vietnamese is Ao Tu Than.

If you have a chance to come and visit Vietnam, do not forget to take the Northeast package travel to experience many beautiful things here.

The history of Ao Tu Than

Ao Tu Than appeared in the 1920s and 1930s. It was long from the collar to the flap which was 20cm far from the knee. Ao Tu Than had two flaps. They were front flap and back flap. There were 2 separated strips on the front flap. There were also two strips on the back flap, but they were stitched together, which created a line called the waist seam.

At this time, because the cloth was only 35-40 cm wide, it was mixed with the others to make a flap. Thus it has been called Ao Tu Than which consisted of 2 flaps and 4 strips. Ao Tu Than had no buttons but two sleeves.

The girls wore Ao Yem inside. Ao Yem with the dark color was for old women, and the ones with light color were for young women. Besides Ao Yem is the thin white blouse. The girls would use the green belt to tie a short blouse and a waist narrowest width or black trousers gently. This green belt also had a decorative value in color.

The outermost layer was Ao Tu Than which was long and charming, making the body of the girl neat and slim. Ao Tu Than had no buttons, so it was comfortable enough to work and walk. The back of Ao Tu Than had 2 pieces of cloth being usually brown and light brown. The front had two separated flaps which were tied together and dropped in front of the belly charmingly. 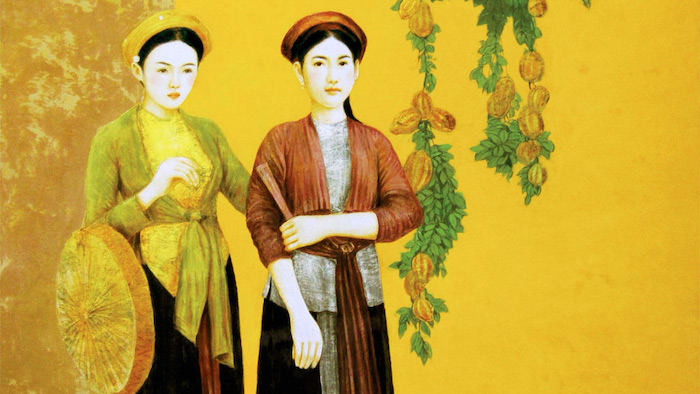 Ao Tu Than in the past

The upper did not have buttons, and Ao Yem inside was visible. Ao Tu Than was long near the heel with the tight sleeves. The rural women used Ao Tu Than with dark colors, so it was considered Vietnamese farmer clothing. Ao Tu Than was the costume of women in the North of Vietnam. It was used as the daily costume until the early 20th century. Today, Ao Tu Than is only worn in traditional festivals.

So far, no one has known precisely the origin of Ao Tu Than. Some archaeological heritages have found the image of Ao Tu Than with 2 graceful flaps flying in the wind. This costume is still found on the surface of Ngoc Lu bronze drum which has existed for thousands of years.

In the legend, during the battle fighting the invasion of the Han dynasty, the Trung sisters wore a long dress with two golden flaps. Vietnamese women wore Ao Tu Than instead of long dresses to express the reverence for them.

Another explanation is that because of the old textile technique which could only weave the fabric with the small size (about 40cm), it was hoped to sew a dress putting 4 pieces of cloth together. Ao Dai Giao Lanh (the primitive type of Vietnamese Ao Dai) usually worn so that the two front flaps could intersect each other but not be tied. Ao Dai Giao Lanh changed into Ao Tu Than to suit for working in the paddy fields and trading.

Between the 17th - 19th centuries, the women in the city had transformed Ao Tu Than into Ao Ngu Than to express their good class and luxury. The image of Ao Tu Than, Khan Mo Qua, and Non Quai Thao has been kept by the women singing Quan Ho songs up to the present. It symbolizes a long-standing culture of Kinh Bac people.

Recently, along with the development of social life, Ao Tu Than has become the fashion industry with exquisite innovative designs. Some designs have been shown on the international stage in the big beauty contests. However, most of them have not accepted the support of the Vietnamese people.

The meaning of Ao Tu Than 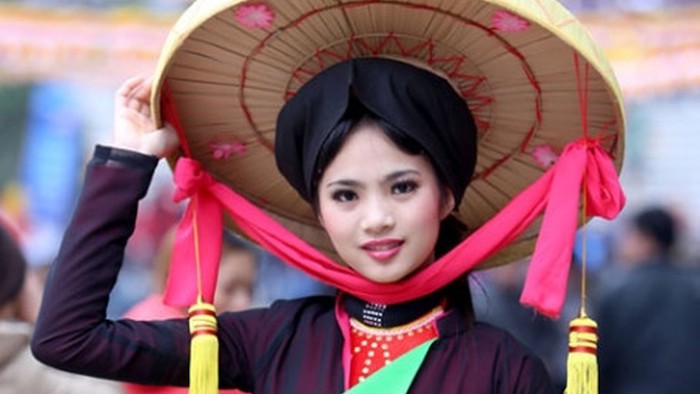 Non Thung Quai Thao has not been loved in Vietnam anymore; therefore, foreign tourists only know about traditional Vietnamese costumes in the past. However, these simple costumes will not be lost, and they are always in the mind of Vietnamese people and considered as "the soul of Vietnam."

If you intend to visit Vietnam with your dear family and friends, do not forget to take a chance to explore the symbols of Vietnam traditional villages here. For further information, don't hesitate to let us know or visit our website. Please like and share the article if it's useful for you. Thank you and have a great trip!