When talking about the aesthetic aspect, culture, and traditional clothes of Vietnamese people, Vietnamese Ao Dai and the conical hat are thought about immediately. Through each period and the process of historical development, Vietnamese Ao Dai has been existed along with the time, and it is considered the long-standing traditional costume of Vietnamese people. If you have a chance to come and visit Vietnam, do not forget to take Vietnam tour groups to experience many good things in Vietnam.

The history of Vietnamese Ao Dai

Returning to the past, the charming image of Vietnamese Ao Dai was found on the surface of Dong Son bronze drum which is about thousands of years far from us today (2879 BC-258 BC). 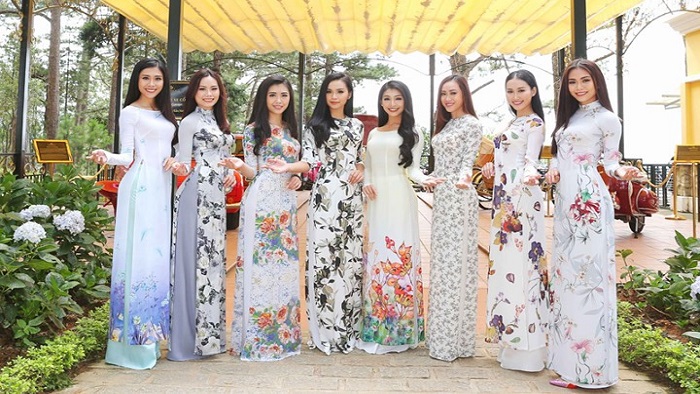 In the legend, when riding the elephants to the battle, the Trung sisters (40-43 AD) dressed in golden two-part armor. Vietnamese ancient women usually wore 4-part dresses instead of the two-part ones to respect the Trung sisters.

From the 17th century to the 19th century, women in the city changed the 5-part dresses into the 4-part ones to express wealth as well as social status. As a rule, the costumes were also associated with the course of history, the 5-part dresses were not the final ones of Vietnamese traditional costumes.

In the book "Relation de la Nouvelle Mission des Péres de la Compagnie de Jesus as Royaume de la Cochinchine" publishes in Lille in 1631, the clergy Borri described clearly about how Vietnamese people get dressed in the early of the 17th century that "They wear five or six Ao Dai overlapping one another, each has one color... Under the lumbar section, the outer layer of Ao Dai is cut into long strips. When walking, these strips intertwine one another beautifully..."

Perhaps, the clergy Borri misunderstood the number of the layers of Ao Dai worn by Vietnamese women. In fact, the outer layers of Ao Dai which were cut into the strips under the lumbar section the clergy Borri talked about were plastrons in form of a lotus wing which the people in the past wore in front of the chest or under the lumbar section of the outer layer of Ao Dai. The plastron has 3 or 4 layers of silk overlapping one another.

The innermost layer is the longest, and the outer layers are shorter. The Ngoc Nu statue carved in the 17th century at Dau pagoda, Bac Ninh province is the best evidence of both the Ao Dai, the lotus-wing strips, and the way to braid a towel which the clergy Borri wore in 4 centuries ago.

In 1819, that the people dressed in black silk pants and a long coat were still maintained as the clergy Borri saw in Thuan Quang more than 2 centuries ago.

Until the beginning of the 20th century, the Ao Dai of women were designed in the form of 5-part dresses. Each front and back body of the Ao Dai had 2 strips, stitched together along the side seam. It was added the fifth strip on the right side in the front body. The sleeve was sewn under the elbow because the old fabric was weaved with the widest length of 40cm. The collar stand, sleeve, and body parts of the Ao Dai were often tight to the people's body.  The bottom was quite wide with a width of 80cm. And the collar stand was only about 2-3cm high.

In the North in 1910 - 1920, women preferred to add a 3cm yoke in the right of the stand collar. The collar would be more charming and present with the necklace chain.

The Ao Dai in the past were usually dual ones, which meant they were sewn with a lining. The innermost layer was sewn simply by a white fabric that was easy to wash. The dual Ao Dai with a lining created tri-strips. The trousers were designed with medium size with a low cross point. Women in the South and the North loved dressing Ao dai mixed with black trousers, while women in Hue preferred white ones. 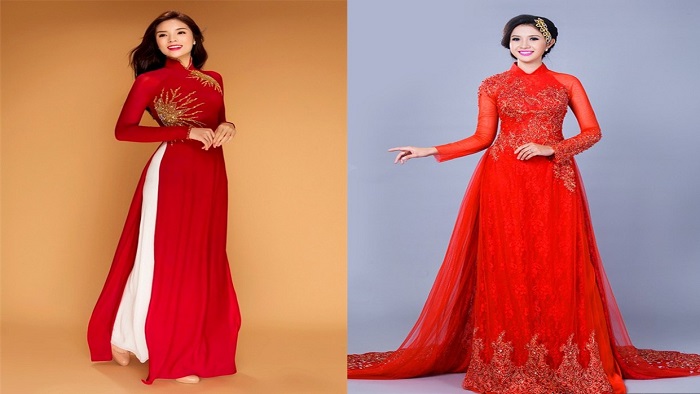 A few dressmakers began to appear in this period, but most of them just removed the connection with the seam because Western fabrics were sewn wider. The sleeves were still sewn connectedly. Cat Tuong store was the most famous one at Hang Da Street, Hanoi. In 1939, this tailor-designed westernized Ao Dai. The collar of the Le Mur was changed into a heart shape collar. However, this type only existed until 1943.

By 1950, the waist cincher had been sewn with the waist section. The tailors at that time were clever when cutting the Ao Dai based on the body of people. The back flap was wider than the front one, the waist seam was cut narrower, and the collar was higher.

The Ao Dai was changed most in the 1960s, the Ao Dai had the waist, and the waist was cut higher. The hem was cut straightly and lengthened to the ankles. Many people sew the Ao Dai with a round collar. Until the end of the 1960s, the mini Ao Dai became fashionable. The flap was sewn narrower and shorter. There was no waist but a curve. In the 1990s, the Ao Dai was designed more sophisticatedly and elegantly, and they began to be considered a symbol of Vietnamese women by international friends besides the "ao yem" and Four-panel traditional dress (Ao Tu Than).

Being one of the top 10 things to see in Vietnam, the Ao Dai are both traditional and modern. This woman costume can be worn anywhere and anytime such as at offices, schools, weddings, parties, and etc. This costume can be mixed with silk trousers and high-heeled sandals. The modern Ao Dai is highly personalized: each is just for one person.

If you are attending to come and visit Vietnam. The most popular symbol of Vietnamese village tours will be your new exploration. If you have any questions, feel free to contact us. Have a nice trip!