The image of graceful girls in a charming ao dai has long been a symbol of Vietnam. However, looking back on the history of national costume development, Vietnam has not only "ao dai" with a conical hat - the most popular symbols of Vietnamese village but also "ao yem" - the indispensable costume of girls in the past.

Let's have a Vietnam combo tour to see and explore this unique costume.

Ao Yem - the indispensable costume of the ancient Vietnamese woman

In the old days, "ao yem" was usually called "cai yem." Besides "ao ba ba" - the beauty of the South, it is the costume that has existed for ages and is still kept until today. "Yem" is an indispensable outfit of the ancient Vietnamese woman. It is a piece of cloth that is square or diamond with a strap attached to the neck and tied behind the back to cover the chest.

The form of "ao yem" is also very simple, easy to make and wear, useful in life. However, it has many meanings of spiritual values and is a symbol of love and humanity. "Ao yem" has entered the poetry with romantic beauty. Under the eyes of men, a girl wearing"ao yem" has a charming attraction. According to the usual pragmatic definition of "ao yem", it is the inner underwear to cover the chest and the belly.

However, the small part of the costume to cover the chest is a feature of the wearer's culture. The ancient people considered "ao yem" as sacred clothing. No one sells them. Therefore, girls often cut and sew "ao yem" by themselves. Even when washing and drying "ao yem," they must be secret and not exposed.

"Yem dao" is an important part of the costumes of the ladies. When going to puberty, the girls begin to notice themselves and know how to beautify themselves. It was also when they were dressed "yem dao" with privacy, fervidness, and gentleness. 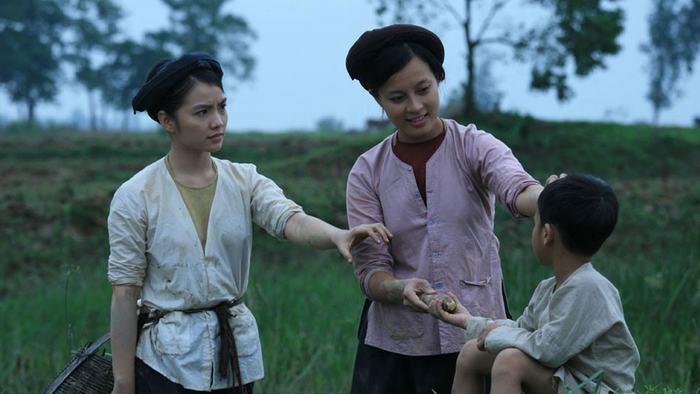 Ao yem in the past

Not only in the royal palace with the princesses but “ao yem” was also worn by female farmers when going to the field with “ao tu than,” even in the festivals in the village. It contributed to creating the national dress of the old ladies. Some researchers believe that "ao yem" was created to embellish the beautiful back like the back of bee which is considered a beauty of women in Vietnamese culture.

According to the Vietnamese tradition, a beautiful girl has to have a small bent back like a bee's back. The ancient Vietnamese believed that girls with a bee's back were not only beautiful but also full of all the virtues of a wife and mother.

"Cai yem" appears in the life of the Vietnamese people for a long time ago and until the Ly dynasty in the twelfth century,  "ao yem" has been popular with women. In historical sequence, "ao yem" is continuously changing, enhancing the aesthetics through the improvements.

In the 17th century, "ao yem" did not have a clear change in its form. In the 19th century, "cai yem"  has the square shape crossing in front of the chest. The upper corner of "ao yem" has a hole cut for the neck to get through.

The two ends of the hole are attached to two strings to tie to the back of the neck. There are "ao yem" with a round-shaped neck and "ao yem" with a V-shaped neck. In the 20th century, "ao yem" is more popular with many designs and models. For workers, 'ao yem" has a brown color and is woven from yarns. Older people often wear "ao yem" which has dark colors.

When going out, the woman usually wears a long dress, a peaked skirt with peach silk tied around the waist. Also, the "ao yem" costume will be perfect if it is accompanied by two scarves: Headband (inner wrap) and kerchief  (wrapped outside). During the festivals, the girls usually bring a "non quai thao" and wear their hair up inserted a comb into. 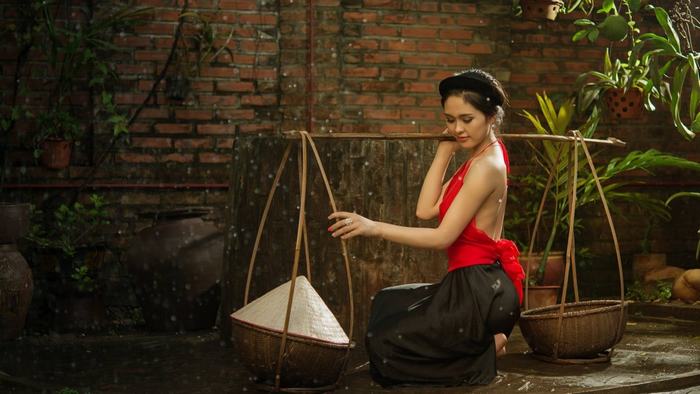 The revolution of "ao yem" took place in the 20th century when Western dress styles penetrated Vietnam with the introduction of many new bras and strange "ao yem". These clothing are more convenient, so "ao yem" is no longer widely used. It often used only with traditional costumes in traditional festivals.

Today, "ao yem" has been modified to be a short shirt for young girls. This "ao yem" had two straps on the shoulders instead of the previous one with two straps around the neck and two straps on the back. Some types of "ao yem" are also used as outerwear when going out, but the number of users today is very rare because this type is not suitable for the traditional style of the Vietnamese people.

Although today, "ao yem" is less used by the girls, the old "ao yem" still deserves a legacy of Vietnamese costume. If you want to travel to Vietnam and learn about other Vietnamese cultures,  feel free to contact us via our website Vietnam group tours. Share it if it is useful to you. Have a great trip!